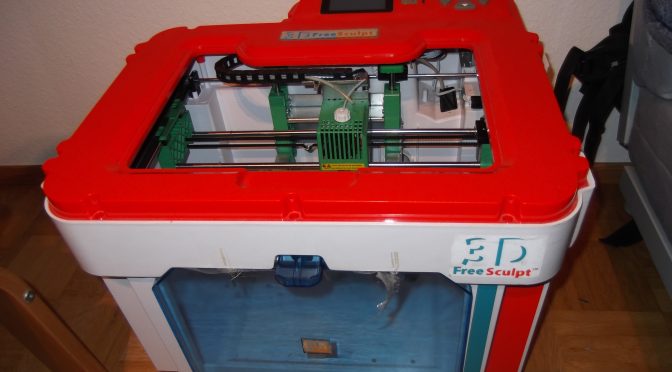 After finishing this project I want to share some details on how to reverse engineer and upgrade a proprietary printer to an open source solution, and why you would want to do this.

The Myriwell printer (available as Freesculpt printer) is available for little money and offers a complete solution, which is both positive and negative. If something breaks, you can easily throw out the whole printer, although most parts are still OK. The Myriwell printer is in many parts very similar (might even say a clone) of a Makerbot 2, there are many similar design decisions such as the very particular X-Carriage. Some things are really not so great about this printer, for instance the fact that the extruder hot end as the most important part is basically a hot wire wrapped around some Kapton tape, which was charcoaled by the time I looked inside.

At the end of the project stands a 3d printer for little money with very good performance and open-source Repetier Firmware which gives all the options. It is even possible to reuse the hardware buttons and LCD display.

Lets take a look at the Pros and Cons of the Freesculpt printer:

-No control options during print

-Constant temperature for bed and extruder set on printer menu

For owner such printers, you can find the precise settings and everything about the printer in a separate post.